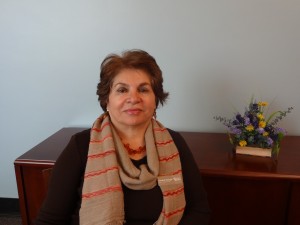 In her first four months on the job, Dr. Farzaneh Razzaghi, new dean of library services, has made as her top priorities planning for the future and increasing awareness in the WCU academic community about library services and resources.

A new planning committee is open to any library employee who wants to join. A marketing committee has been charged with developing a calendar of events for the year. All of the library’s department heads have written action plans for 2015-16 with specific goals and objectives. Additionally, outreach efforts resulted in more library services in the fall semester for students at the Biltmore Park instructional site.

Razzaghi believes that strong partnerships between the library and the university’s colleges and departments are essential for WCU students to achieve their educational goals. The quality of the library’s engagement is reflected in its resources, teaching and accessibility, she said. “Academic libraries are no longer just repositories where information is collected and preserved. That role changed many years ago,” she said. “Today we are actively engaged in disseminating a vast amount of information. We also have an important role in assisting students in retrieving, using, and creating knowledge, and making it accessible to them wherever they are, as much as our resources allow.”