The newest digital collection focuses on World War II materials from Hunter Library’s Special Collections department. Current highlights of the collection come from the Carr and Ruth Hooper collection and the Venoy and Elizabeth Reed collection. 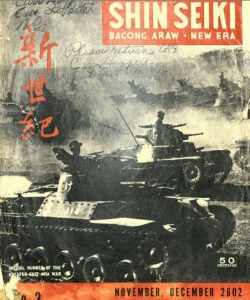 Japanese propaganda magazine, brought back by Carr and Ruth Hooper, from the Santo Tomas Internment Camp in the Philippines.

Carr Hooper was born in the Cowarts community of Jackson County, North Carolina and he received a degree from Western Carolina Teachers College in August 1931. Hooper met Ruth Williams of Fayetteville, Tennessee, while studying at the George Peabody College for Teachers in Nashville, Tennessee, and the couple married on August 20, 1931. In 1932, Carr Hooper accepted a position with the department of education in the Philippines where he taught English. After the beginning of war between the United States and Japan on December 7, 1941, the Philippine Islands were occupied by Japanese forces. In January 1942, the Hoopers were sent to the Santo Tomas internment camp in Manila and they remained there until February 1945. After liberation, the Hoopers returned to the United States. Carr Hooper returned to teaching in western North Carolina. In 1956, he accepted the position as principal at the Sylva High School and later, in 1960, at Sylva-Webster High School. He retired from the profession in 1969. The football stadium at Sylva-Webster High School, now Smoky Mountain High School, in Sylva, is named in his honor. 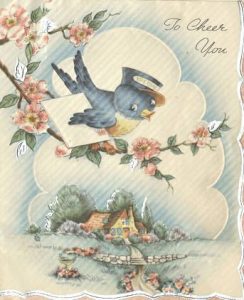 Robert Venoy Reed was born in Sylva, North Carolina on May 28, 1915. He graduated from Sylva High School in 1936 and worked as a sales clerk at the Sylva Pharmacy before joining the military in October of 1942. Reed enlisted as a private in the United States Army at Camp Croft, South Carolina, and trained as a medic for the army. Reed was captured by German forces on January 19, 1945, and was assigned to work with a German doctor caring for German civilians and American prisoners-of-war. At the time of his separation and honorable discharge from the U.S. Army on October 12th, 1945, Reed was a Technician, 4th grade, Medical Aidman. After being discharged from the Army, Reed returned to Sylva and resided there for the rest of their lives. Reed was awarded the Silver Star Medal for heroic action in Cherbourg, France.

Letters, memoirs, and other materials documenting the Hoopers’ and Reed’s experiences overseas during the war from these collections have been digitized and are available through the library’s digital collections. Additionally, graduate students from Dr. Brian Gastle’s ENGL 618, Research Methods in English, class transcribed and annotated these materials providing important contextual information. These annotated editions are available through the library’s institutional repository, NC DOCKS.