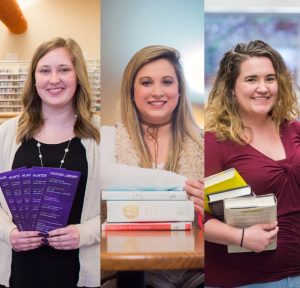 Emily Gray of Newport, N.C., and Whitney Holloway of McFarlan, N.C., were named Hunter Library’s outstanding student workers for the 2016-17 academic year and honored with commemorative posters displayed on the library’s first floor.  Kristy Gaskell of Lenoir, N.C., was nominated by her supervisors for WCU’s 2016 Student Worker of the Year award, a university-wide competition.  The award winner has the opportunity to compete at regional and national levels.

Gray, a criminal justice major and psychology minor, plans to pursue a career in law enforcement after graduating.  Her supervisor Shirley Finegan says, “As the first to volunteer for any project, Emily not only succeeds in managing several collections, but she also serves as a library ambassador by participating in WCU student orientations, assisting with the Long Night Against Procrastination event, and writing articles for the newsletter.”

Holloway, a nutrition and dietetics major, plans to pursue a career as a registered dietitian nutritionist and certified diabetes education after graduation.  Finegan describes her as hard-working, dependable, and meticulous in organization of the ground floor’s nutrition collection. Whitney’s professional style was recognized in the fall when she was asked to provide customer service training for other student workers at the library’s annual lock-in event.

Gaskell, a psychology major, plans to attend graduate school for school psychology after graduation.  Her supervisors agree that “whether she’s improving inventory workflow procedures, assisting in closing the building, or suggesting changes to library services, Kristy’s problem solving skills and civic-minded attitude go a long way to make Hunter Library a better place for everyone at WCU.”