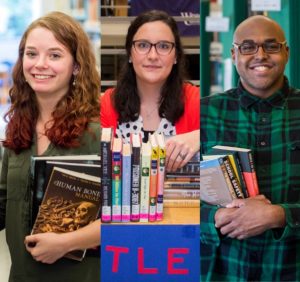 Kristen Cook of Kinston, N.C., and Lorraine “Rainey” Kelly of Deep Run, N.C., were named Hunter Library’s outstanding student workers for the 2017-2018 academic year. Cody Pearsall of Greensboro, N.C., was nominated by his supervisors for WCU’s Student Worker of the Year award, a university-wide competition.  The award winner has the opportunity to compete at regional and national levels.

Cook, an anthropology major, plans to attend graduate school at East Carolina University after earning her undergraduate degree. Her supervisor Shirley Finegan says, “Kristen is very reliable and we are grateful that she works the early morning shifts. When she is on the job, you know it will be done, and done correctly.”

Kelly, a middle grades education major, plans to return to her hometown to teach after graduation.  Her supervisor JoAnn Marvel says, “Rainey has an amazing work ethic and her creativity is reflected in the CMC posters, signage, and displays.  Her engagement with our visiting Catamount School groups has not gone unnoticed.”

Pearsall, a social work major, plans to attend graduate school after receiving his undergraduate degree.  His supervisors agree that he has an amazing attitude one wishes to see in all their employees. “No matter the task, whether he is helping patrons at the circulation desk or moving collections and furniture, Cody maintains a positive attitude,” Finegan says.